You are at:Home»Mumbai»Railway Protection Force- The True Saviours of Railway Commuters

Mumbai: Railway Protection Force RPF personnel are always in the forefront and keep a round the clock vigil in safeguarding not only railway properties but also saving hundreds of lives of Mumbai rail commuters with the help of other on duty Railway staff.

Central Railway RPF personnel, as a part of “Mission Jeevan Rakshak” have saved 47 lives so far over Mumbai suburban system in the Year 2021, at times even risking their own life. Visuals of some of these lifesaving incidents have become very popular in Print & Electronic Media and have gone viral on social media.

These soldiers of the Railway Protection Force face diverse security challenges such as crime against passengers and railway properties, extremist violence, obstruction to train movement, rescuing missing children and seizing narcotics in trains and railway premises. Amidst all this they keep a close watch on the safety of passengers.

The alert RPF in most cases, has saved the lives of those passengers, who are sometimes negligent and face danger while boarding or alighting running trains. At times lives have been saved while attempting suicide due to various personal reasons. But in the end, this act of saviours results in jubilation, happiness and gratitude beyond words towards the RPF personnel. 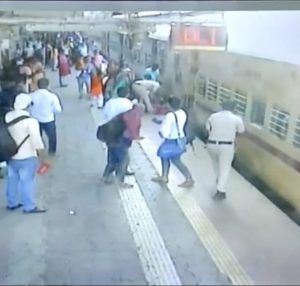 In this year 2021, over the Mumbai Suburban /Non-Suburban network, out of 47 lives saved, 11 cases were saved at Kalyan station, 10 cases were saved at Dadar, 6 at Thane, 4 at LTT, 3 at Panvel, 2 each at Kurla & Vadala Road ,1 each at Turbhe, Titwala, Roha, Kasara, Dombivli, Ghatkopar, Byculla, Diva and CSMT Main line stations. Most of them were saved during boarding or de-boarding long-distance trains. Recently on 26.12.2021, RPF Constable, Mr Raju Puniya while performing his duty at Thane Station saw a passenger Shri Ram Pravesh Bihari, a resident of Azamgarh, UP slipping down while trying to board a running train 11055 Dn Godan Express. The Guard of the train also saw this and immediately dropped the pressure and stopped the train thus saving the passenger from an imminent death. In another incident, RPF Constable R K Meena while performing platform duty at Panvel station on 17.12.2021 saw a lady passenger Ms Gyan Devi resident of Kamothe, Panvel slip and fall between train and platform while trying to board train no15066 Panvel-Gorakhpur, He acted immediately pulled the passenger to safety and saved her life.

These brave soldiers of the Railway Protection Force have become a symbol of God’s Messengers with their alertness and courage having saved the lives of many commuters.