You are at:Home»Mumbai»New Swedish Ambassador calls on Governor Koshyari

The newly appointed Ambassador of Sweden to India Jan Thesleff has said that Sweden is working closely with India on the issues of Environment, Sustainability and Digitalization. Stating that the Trade Minister of Sweden will be visiting India later during the year, he expressed the hope that the cooperation between the two countries will further grow in the coming years. 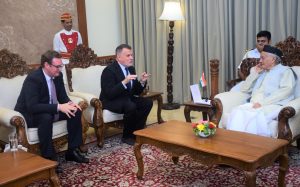 The Ambassador was speaking to Maharashtra Governor Bhagat Singh Koshyari during a courtesy call at Raj Bhavan Mumbai on Wed (23 Nov).

The ambassador told the Governor that Sweden is launching the India – Sweden Green Transition Partnership later during the day. He said through the partnership Swedish companies will work with Indian corporates and companies across cement, iron and steel sectors and contribute to their green journeys.

The Consul of Sweden in Mumbai Erik Malmberg was also present.