You are at:Home»India»India Post released a Special Cover to commemorate 75 years of muncipalization of BEST on 7th August, 2022

Mumbai: India Post released a Special Cover to commemorate 75 years of muncipalization of BEST on 7th August, 2022. BEST is considered to be one of the largest urban transport services in India. BEST is providing transport services in all parts of Mumbai as well as in suburban cities like Navi Mumbai, Thane, Mira-Bhyander. BEST is considered to be the second major lifeline of the citizens is after the Mumbai Locals. 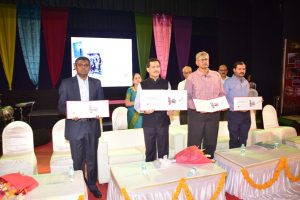 BEST is one of the few profitable electricity boards in India.

When the entire Nation was under countrywide lockdown, BEST played  an important role by providing transport facility to the essential services providers of the city.

On 7th  August, 1947 BEST was undertaken by Mumbai Municipal Corporation. Since then 7th August is celebrated as ‘BEST DAY’.

On 7th August, 2022 BEST celebrated completion of 75 years to the event. On this occasion Department of Posts released a Special Cover to commemorate the event. Shri Abhijeet Bansode, Director Postal Services (HeadQuarters), released the cover and handed over the first album to G.M. BEST Shri. Lokesh Chandra.