You are at:Home»Mumbai»Inauguration of #MMRDA Kopri Bridge, Thane

The traffic issues on Eastern Express Highway, mostly within the stretch from Mulund to Thane will be eased with the flyover coming underuse. It was earlier available with two lanes on each side for traffic. But in last few years the number of vehicles and the population of both the cities increased and that resulted in major traffic issues around this flyover. The four-lane express highway became two-lane on the flyover and it created a bottleneck for the traffic. The Mumbai Metropolitan Region Development Authority (MMRDA) in its meeting dated 19th October 2016, decided to undertake the widening of the flyover.

Quote from MMRDA Metropolitan Commissioner, Shri S.V.R. Srinivas: “The construction of flyover started on 24th April 2018. The MMRDA team with the support of Thane Municipal Corporation overcame various challenges to complete this project. This project was undertaken with the aim of easing traffic on the crucial Thane-Mulund stretch and improve the daily commute experience of Mumbaikars traveling between Thane-Mumbai.” 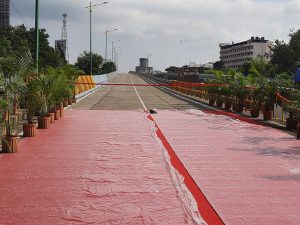 Currently, the first phase is completed and now the traffic from both sides will be diverted on these routes and then the second phase work will be completed. The total length of the flyover being newly constructed is 796 meters and the length of the flyover over the railway is 65 meter, and its the height from the railway track is 6.525 mt. The width on both sides for four lanes is 37.4 mt.