●        The VinFuture Prize is aligned with one or more of the UN’s Sustainable Development Goals (SDGs) and is grounded in recognising proven, real-life impact

●        Recipients were selected from nearly 600 nominations across 60 countries

HANOI, VIETNAM – Media OutReach – 21 January 2022 – The inaugural VinFuture Award Ceremony honors inventors of core mRNA vaccine technology; metal-organic frameworks (MOFs); flexible semiconductors with the sensing properties of human skin; and tenofovir gel for the prevention of HIV. These projects are exceptional scientific accomplishments that will positively impact the lives of billions of people on Earth in the present and future. 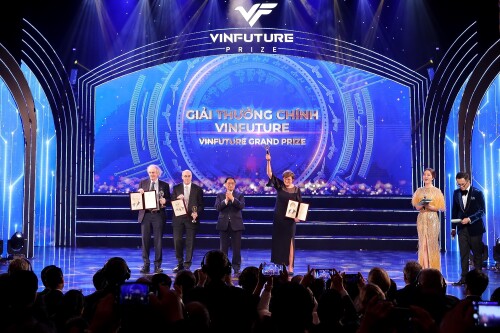 Honouring exceptional minds whose research and technological innovations will improve quality of life and ensure sustainable living for future generations, The VinFuture Prize was launched on International Solidarity Day 2020 and is uniquely aligned with one or more of the UN Sustainable Development Goals (SDGs).

The award programme is part of the VinFuture Foundation, an independent, not-for-profit set up by Mr. Phạm Nhật Vượng, the first Vietnamese billionaire and Founder and Chairman of the largest Vietnamese conglomerate, Vingroup Corporate, together with his wife, Mrs. Phạm Thu Hương, to create meaningful change in the everyday lives of millions by recognising and rewarding transformative innovation in sci-tech.

Attracting almost 600 nominations across 60 countries in its inaugural year, the Prize represents the best in science and technological breakthroughs in these fields. Of these nominations, nearly 100 came from the world’s top 2% most-cited scientists, many of whom are themselves laureates of distinguished awards, such as the Nobel Prize, Breakthrough Prize and Tang Prize, among others.

The Grand Prize, valued at US$3 million, is awarded to three scientists: Katalin Kariko (USA), Drew Weissman (USA) and Pieter Cullis (Canada) for their work on mRNA technology, which paved the way for effective COVID-19 vaccines. In their research, they were able to modify mRNA and encapsulate it in lipid nanoparticles, preventing the immune system from reacting to foreign mRNA entering the body and avoiding cytokine induction, toxicity, and off-target effects. Based on Kariko and Weissman’s discovery, and Cullis’s development of lipid nanoparticles, pharmaceutical companies like Pfizer-BioNTech and Moderna were able to produce effective COVID-19 vaccines in record time.

Besides serving as a global line of defense against the increasing infections and deaths caused by the pandemic, mRNA technology also has the potential to generate vaccines against HIV, cancer, autoimmune diseases and genetic diseases, potentially saving the lives of billions of people in the future.

In addition to the Grand Prize, three Special Prizes, each valued at US$500,000, have been dedicated specifically for female innovators and to recognize innovations in emerging fields and in developing countries.

The first Special Prize, dedicated to “Innovators with Outstanding Achievements in Emerging Fields”, is awarded to Professor Omar Yaghi (USA) for his work on discovering metal-organic frameworks (MOFs). MOFs are a new class of materials formed as networks of charged molecules linked to metal ions, with permanent porosity with high surface area and impressive stability. With tuneable pore sizes that enable the absorption and storage of gas and water molecules, MOFs provide solutions for the capture, storage, separation, and chemical manipulation of different types of gases and particles, and have the potential to create a cleaner environment and cleaner air, energy, and water sources.

In particular, Professor Yaghi’s MOF water harvester has been proven to have the potential to generate clean water at any time, in any place. If successfully implemented, MOFs can improve the lives of millions of people in regions that lack access to clean water, helping increase water independence and increase quality of life.

The second Special Prize, dedicated to “Female Innovators”, is awarded to Professor Zhenan Bao (USA) for her work on developing flexible electronics with the sensing properties of human skin. The electronics are made from a type of flexible molecular semiconductor material that has self-healing and biodegradable properties, allowing electronics to be integrated seamlessly into the human body. They have great potential in medical diagnosis and smart healthcare and can also be applied to wearable and implantable electronic devices, enhancing the quality of life of millions of people with disability and sparking future medical breakthroughs. 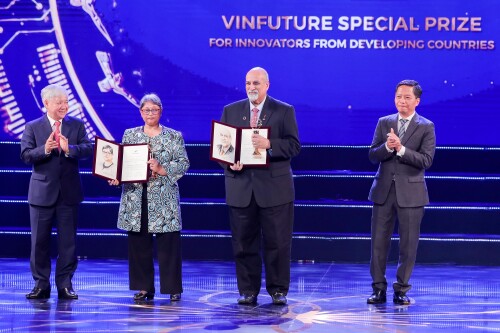 The Special Prize, for “Innovators from Developing Countries”, is awarded to Professors Salim Abdool Karim and Professor Quarraisha Abdool Karim from South Africa for their research on effective HIV prevention. With extensive experience in the field of epidemiology, the two scientists developed a tenofovir-based gel that prevents sexual transmission of HIV, laying the foundation for the pre-exposure prophylaxis (PrEP) method of preventing HIV. Salim Abdool Karim and Quarraisha Abdool Karim also created an oral medicine to create an HIV prevention strategy across the world, including for women and infants.

The Karims’ research was recognized by UNAIDS and WHO as a pivotal scientific breakthrough, with significant impact on the prevention of an epidemic in the African continent and the world.

Speaking about the results of the inaugural season of the VinFuture Prize, Professor Sir Richard Friend, VinFuture Prize Council Chair, stated: “The VinFuture Prize 2021 recognizes truly outstanding scientific work that has made and will make, a positive impact on the lives of millions, or even billions, of people around the world. The winners have brought new solutions for some of the most significant challenges that humanity is facing, such as infectious diseases and meeting the urgent need for zero carbon energy. The VinFuture Prize celebrates the power of science and technology to solve global problems.”

On behalf of the Prize Laureates, Professor Katalin Kariko shared: “It is an incredible honor to learn that the Prize council selected me, together with my fellow scientists Drew Weissman and Pieter Cullis, to receive the inaugural VinFuture Grand Prize. We, as scientists, work at the bench in the laboratory, performing experiments day-after-day and hope that one day – maybe in our lifetime – we can witness that the advancements we made will be beneficial for the common good. We are all relieved and thrilled that our scientific discoveries laid the foundation for the development of the mRNA vaccines. It is also important to note that the vaccines were developed based on a century of scientific and technological progress and recent discoveries by hundreds of thousands of scientists, doctors, engineers and experts who advanced the knowledge of their respected fields, and the combination of that work led to the creation of these very effective and safe mRNA vaccines. We hope that our scientific adventure will also inspire the next generation of researchers and doctors, and that their contributions will advance our scientific knowledge on a higher level leading to the treatment of patients with unmet medical needs.”

The first VinFuture Award Ceremony was broadcasted live on major communication channels across the world, with the appearance of Mr. Pham Minh Chinh, Prime Minister of Vietnam, leaders of domestic ministries and agencies, global ambassadors, industry leaders, and in particular, eminent international scientists.

The Award Ceremony signals the end of the first season of the VinFuture Prize, with results far exceeding the expectations of the Prize Council in terms of both quantity, quality, and practical application potential of the nominations. The early success of the Prize lays the foundation for broadening the Prize’s impact in coming years, recognising scientists who seek and deliver solutions to humanity’s problems, contributing to creating a better life for everyone, and building a sustainable environment for future generations./.

The issuer is solely responsible for the content of this announcement.