You are at:Home»India»CinCAN’s presence in Eastern C-in-C Conference may be a first move towards theaterisation 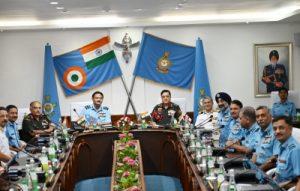 This is not the first time that an Eastern C-in-C conference has been held but veterans do not recall the CinCAN attending one.

The Andaman and Nicobar Command is a tri-services command by itself.

“One wonders if this could have been the first step towards creation of an Eastern Theatre Command that will include the assets in place at the Andaman and Nicobar Islands. The People’s Liberation Army Navy (PLAN) operates close to India’s territorial waters around the archipelago that has several uninhabited islands,” a retired Vice Admiral of the Indian Navy said.

Security experts believe that the Andaman and Nicobar Islands is India’s Achilles Heel, given their proximity to the Malacca Strait and the South China Sea.

Any aggressive stance from across the LAC can be handled far more easily than a threat at sea more than a thousand km away from the mainland.

Former CinCAN’s Vice Admiral P K Chatterjee in his presence(retd) has highlighted the threat faced by the Andaman and Nicobar Islands at various fora. In his opinion, defences need to be further bolstered there with greater number of naval and air assets.

“In case of War, China will go in for a two-pronged thrust. While ground forces and the People’s Liberation Army Air Force (PLAAF) will attempt to breach the LAC, the defences at the Andamans will be tested by surface and sub-surface platforms of PLAN. That is when a unified approach will be required with perfect coordination between the Army, Navy and Air Force. While air assets will have to be proportionately divided to meet the dual threat, the Eastern Fleet will have to rush ships, submarines and aircraft to the islands. The Army units based there will also have to coordinate with the Navy for beaching operations if Chinese troops land on uninhabited islands,” a senior official said.

During the Conference at Shillong, issues concerning interoperability and synergy were discussed along with plans to tackle any sudden move by the adversary. Strengths and weaknesses were identified and reports prepared to be placed before higher authority. All possible scenarios were reviewed in detail and strategies worked out. The PLA has theatre commands with its Army, Navy and Air Force acting in complete coordination.