New Delhi: India Feb retail Inflation rises upto 6% and wholesale inflation upto 13.11%. Higher cost of food items, as well as manufactured goods like clothing and footwear, kept India’s February 2022 retail inflation above the six-per cent-mark on a sequential as well as on a year-on-year basis. 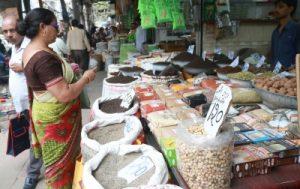 As per the data furnished by the National Statistical Office on Monday, the Consumer Price Index (CPI) rose to 6.07 per cent last month from 6.01 per cent in January 2022.

Similarly, on a YoY basis, last month’s retail inflation rose at a faster rate than the 5.03 per cent increase in prices recorded for February 2021.

As per the NSO data, the rate of rise in the Consumer Food Price Index, which measures the changes in retail prices of food products, increased to 5.85 per cent last month from 5.43 per cent in February 2021.

In terms of CPI inflation rate, pulses and products’ prices jumped by 3.02 per cent in February 2022 YoY. Meat and fish prices rose by 7.45 per cent, eggs were dearer by 4.15 per cent, and oils and fats prices rose 16.44 per cent. Similarly, the overall price of food and beverages category was up 5.93 per cent.

Besides, vegetable prices were up by 6.13 per cent.

Furthermore, as per the official data, the inflation rate for fuel and light was higher by 8.73 per cent.

In addition, sub-group of clothing and footwear showed a price acceleration of 8.86 per cent.

High manufactured goods’ prices pushed up India’s February 2022 wholesale inflation on a sequential as well as on a year-on-year basis.

The annual rate of inflation, based on wholesale prices, rose to 13.11 per cent last month from 12.96 per cent reported for January 2022. 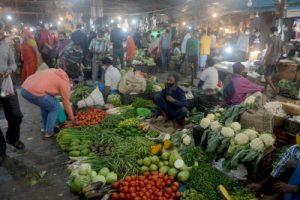 Similarly, on a year-on-year (YoY) basis, the Wholesale Price Index (WPI) data furnished by the Ministry of Commerce and Industry showed an exponential rise last month over February 2021, when it stood at 4.83 per cent.

“The high rate of inflation in February 2022 is primarily due to rise in prices of mineral oils, basic metals, chemicals and chemical products, crude petroleum and natural gas, food articles and non-food articles etc. as compared to the corresponding month of the previous year,” the Ministry said in its review of ‘Index Numbers of Wholesale Price in India’ for February.

The month over month change in WPI index for the month of February 2022 stood at 1.4 per cent as compared to January 2022.

As per the data, the primary articles segment, which has one of the highest weightage in the WPI, increased at a slower rate of 13.39 per cent in February as compared to 13.87 per cent reported for January 2022.

Similarly, the growth rate of WPI food index, consisting of food articles from the primary articles group and food products from the manufactured products group, rose to 8.47 per cent from 9.55 per cent.

Acuite Ratings & Research’s Chief Analytical Officer Suman Chowdhury said: “Clearly, this upward momentum is set to continue in March 2022 as the crude oil prices have shot up further and is currently hovering close to $110 per barrel (Brent).

“The inflation levels would have been slightly higher had there not been a sequential price contraction in the wholesale food category driven by the seasonal drop in vegetable and potato prices. The inflation in manufactured products have risen sequentially to almost 1 per cent and also increased on a YoY basis to 9.8 per cent.”