You are at:Home»Press Release»Bank of Maharashtra organizes Official Language Conference at Hyderabad 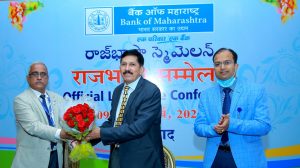 Shri A. S. Rajeev opined that Hindi and regional languages are the best languages to communicate with the customers & improve customer services. He also said that Hindi is a useful tool for business growth.

Shri Radhey Shyam Bansal, General Manager, HRM & Rajbhasha said that it would be our endeavour to learn something new during the conference. We can also undertake an effective review of official language work and a strategy can be devised for progressive use of Rajbhasha.

During the conference, many eminent speakers addressed the Official Language Officers. A session on technology was also conducted by the Deputy Director, Ministry of Home Affairs, New Delhi.