You are at:Home»Mumbai»Western Railway gears up for upcoming monsoon season

Mumbai: Western Railway gears up for upcoming monsoon season. In order to keep the wheels of trains running and to ensure uninterrupted services during ensuing monsoon, pre-monsoon preparation works are in progress on Western Railway in full swing despite ongoing lockdown due to covid pandemic. WR is committed to providing smooth travel for its passengers. Shri Alok Kansal-General Manager of Western Railway said that all works related to monsoon preparedness is being carried out on priority so as to provide disruption free service during the monsoon to the commuters. Sustained efforts in infrastructure upgradation and monsoon related work have improved the suburban operations in the past few years and WR has been able to reduce the hours of disruption due to heavy rainfall. Shri Kansal also said that WR has studied different flooding locations and has tried to come up with customized solutions for each flooding location. He reviewed the progress of monsoon preparation works with Divisional Railway Manager-Mumbai Central and concerned officers and instructed them to complete the work before 31st May 2021.

Western Railway gears up for upcoming monsoon season. According to a press release issued by Shri Sumit Thakur – Chief Public Relations Officer of Western Railway, the monsoon preparation works include cleaning and desilting of culverts, desilting of side-drains, installations of high-power diesel & electric pumps, special maintenance of infrastructure, etc. Cleaning of culverts as well as cleaning of drains will be completed by 31st May, 2021. Despite the lockdown in Maharashtra, it has been ensured that important works regarding pre-monsoon preparation have been going on as per the target over the Mumbai Suburban section of Churchgate-Virar. 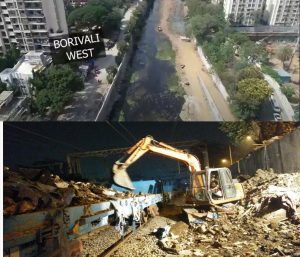 Special Pre-Monsoon Action Being done over Mumbai Suburban section:
● Pre-Cleaning joint inspection of the culverts with respective municipal corporations, i.e., MCGM, MBMC and VVCMC has been completed. The work of cleaning all the culverts will be completed by 31st May, 2021.
● To facilitate smooth storm water discharge into drains, muck/earth/garbage alongside the tracks have been removed.
● New manholes and drains for facilitation in smooth water discharge have been constructed.
● Intensive and multiple round of cleaning 54 no. of culvert and 47 km of drain network in suburban system will be completed before monsoon. The 1st round of culvert cleaning will be completed by 5th June, 2021 and 4 more rounds will be done at an interval of 15 days during monsoon. Similarly, 1st round of cleaning of drains will be done by 10th June, 2021 and 2 more will be done during monsoon.
● Installation of 191 No. of higher capacity pumps has been done this year on Churchgate – Virar section to increase pumping capacity by 33% as compared to last year. It is planned to increase them as per requirement.
● Old cast iron pipes with leakages and breakages have been replaced with wide and covered RCC waterway at two location in the Churchgate – Virar section at Bandra and Prabhadevi. By doing this the discharge capacity of this waterway system has increased by 300 %.
● Till now 1,40,000 cubic metre of muck, garbage, released earth from suburban section has been removed by deploying JCB, Poclain, manual labour and 3 specially modified EMU muck trains for carrying the muck.
● Flooding spots of previous monsoon have been identified and customized solution devised for each spot viz. Bandra, Andheri, Mahim, Grant Road and Goregaon.
● In order to have real time and authentic rain data 4 Automatic Rain Gauge (ARG) are in the process of being installed in association with IMD and 10 installed by WR independently in the suburban section.
● Number of pumps provided on tracks and depots have been increased by 27%, including sewerage and submersible pumps.
● At 15 identified sections in low lying areas, track and OHE has been lifted from 100 mm to 250mm. This will help in avoiding submergence of track during heavy intensity rainfalls in the current monsoon.
● Use of Drone for survey in Borivali – Virar section and major nallas in Vasai-Virar section to monitor the obstructions in waterways and cleaning and dredging of nallas.
● HDPE pipes have been provided across the track in Mahim yard which has resulted in quick discharge of rain water from the Yard.
● Additional opening in Mahim, Matunga and Dadar yard have been provided.
● Suction/de-sludging machines have been used to ensure deep cleaning of culverts.
● Adoption of new micro tunneling method for construction of culverts. This will augment the discharge capacity of rain water. Additional waterways have been provided by micro-tunneling at two locations i.e Bandra (North) and Vasai Yard section. These locations have been identified after the flooding of tracks during last monsoon. These additional waterways will provide huge relief during monsoon as it will help in discharge of water from east to west.
● Joint survey for cutting & trimming of vulnerable trees existing in the vicinity of track is being done by Municipal & WR officials. Till now, 87 vulnerable trees have been identified and 1384 trees have been trimmed. Necessary cutting & trimming will be completed by 25th May 2021.
● Joint checking of Overhead track crossing was done, the work of which has been completed.
● Due to the bird breeding season, it has been observed that birds make nests in OHE structures. These nests have been identified during inspections and all 286 nests have been removed from the structures.
● To avoid the menace of birds, Bird deterrent gel has been applied at almost 6000 locations. The work of applying the gel at the rest of the locations will be completed by the end of this month.
● The work of checking of OHE under FOB, ROB, and under other overline structure for clearance, provision of false catenary has been 95% completed till now, the remaining work will be completed by 20th May 2021.
● Out of 21 redundant/released structures, 17 have been removed, the remaining 4 will be removed by 31st May 2021.
● Checking of OHE on girder bridges has been completed while checking of OHE earth resistance will be completed by 31st May 2021.
● A joint inspection of pantographs and roof equipment of Loco, EMUs, and MEMUs at Loco sheds, EMU sheds, MEMU sheds, Trip sheds is also being done between Churchgate – Virar section and will be completed by 31st May 2021.
● In order to ensure the running of trains during monsoon, special attention is also being given to the maintenance of overhead electric equipment. This includes cleaning of insulators, checking of protective screens on FOB/ROB, protection of contact and catenary wires, and earthing. Till now, a total of 11,103 insulators have been cleaned.
● WR has also taken-up monsoon-related maintenance work of its EMU suburban rakes which include detection & plugging of possible leakages in EMU coaches and their electrical equipment, smooth movements of windows & doors, etc. The work of cleaning a roof of coaches and insulators has also been taken up.
● Insulation testing of various signaling gears will be completed before the onset of monsoon and wherever required, repairs/replacement shall be carried-out.
● The Monsoon attention of EMU rakes involves sealing of lookout glasses in motorman/guard cab, sealing of roof joints in coaches, sealing of high voltage equipment entries on the roof, and sealing of equipment in the underframe. This monsoon attention activity is planned to be completed by end of May in all 110 EMU rakes. The dedicated monsoon staff of Mumbai Central, Kandivali, and Virar car sheds, while maintaining social distance, worked tirelessly to maintain the pace of the work as per target.
● Western Railway has ensured to have round the clock monitoring and manning of control office during heavy rains with special emphasis on maximum high tide days by deputing officers/supervisors at vulnerable locations.
● Special precautions will also be taken at stations to monitor the crowd, especially during heavy rains by monitoring through CCTV and ensuring timely & regular announcements.

Western Railway gears up for upcoming monsoon season. According to Shri Thakur, it is worth mentioning that despite the ongoing lockdown in Mumbai, Western Railway continues to prove its excellent work style, by carrying out these important tasks. This reflects the true dedication and workmanship of the officers and employees to ensure the smooth functioning of trains during the monsoon season.