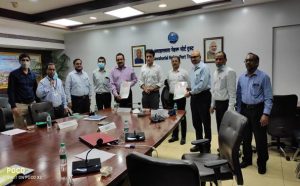 JNPT has five container terminals and handles over 50% of the total container cargo amongst the Major Ports of India. JNPT has allotted land to NSICT, BMCT and GTIPL on lease for a period of 30 years through Concession Agreement, and under the Concession Agreement, JNPT is responsible for providing an electricity supply to the Terminals. With the support of MSEDCL officials, a separate category for JNPT named as “Government/Semi-Government” was created for signing the Franchise Agreement, which will have large load such as Ports, Defence, and MIDC, etc.

“With this agreement, the process of legalizing electricity distribution once for all is resolved and will help JNPT in delivering its duties towards its stakeholders and we are thankful to MSEDCL team for all their support”, said Shri Sanjay Sethi, IAS, Chairman, JNPT.