You are at:Home»Mumbai»Indiatourism Western Region hosts series of initiatives on the occasion of “International Yoga Day”

Mumbai: Indiatourism Western Region hosts series of initiatives on the occasion of “International Yoga Day”.  Since its inception in the year 2015, June 21st is celebrated as The International Day of Yoga all over the world. This idea was proposed by our Prime Minister, Shri Narendra Modi. He said, “Yoga is an invaluable gift of India’s ancient tradition. It embodies unity of mind and body; thought and action; restraint and fulfillment; harmony between man and nature; a holistic approach to health and well-being. It is not about exercise but to discover the sense of oneness with yourself, the world, and nature. By changing our lifestyle and creating consciousness, it can help in well being.” An article return by Shri Kiren Rijiju (Union Minister of State for Youth Affairs & Sports, AYUSH (Independent Charge) and Minority Affairs, Govt. of India )on IDY, 2021 ‘Yoga – a protective shield for health at all times’ he mentioned that the impact of celebrating IDY shows an increase in the tourism too. as per Tourism statistics from the Ministry of Tourism, the foreign inflow of tourists who came to India for yoga training has significantly gone up after 2015 IDY with an increase of 37.4% by 2018, i.e., over four years.
Indiatourism Regional Director, Western Region, Shri Venkatesan Dhattareyan introduced a host of activates for 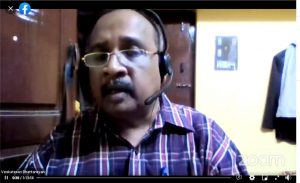 the better health and vitality of the mass population through virtual platforms using the technology to avenge the pandemic and provide a healthy living.
The IDY celebrations began on Friday 18th June by the Yoga instructor Dr. Manasa Rao, on the salient features of Yoga and the necessity of practicing Pranayama self care while staying home during the pandemic time. Dr. Manasa Rao demonstrated and explained the numerous positive areas of the Pranayama is the yogic practice of focusing on the breath. Prana means “vital life force”, and Yama means to gain control. In yoga, breath is associated with the prana, thus, pranayama is a means to elevate the Prana Shakti or life energies.

Indiatourism Western Region hosts series of initiatives on the occasion of “International Yoga Day”. On the second day on 19th June too Dr. Manasa Rao elaborated the ways and means of relaxation through Pranayama. She brought out the salient feature of Pranayama is the practice of breath control for the sake of enlightenment, purification, and good old-fashioned relaxation. … Pranayama invites in various breathing techniques that help deepen your connection to your breath and your body. There are several ways to de-stress — pursuing hobbies, listening to music, exercising, or simply spending time with loved ones. However, experts unanimously agree that certain yoga asanas can battle stress to a great extent.
On 19th June evening, there was a program about Resilience – The Path to emotional Freedom by Ms. Ranjana 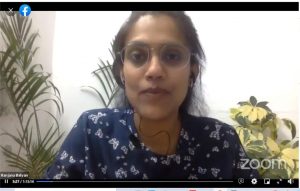 Balyan. She said that Emotional freedom becomes compulsory in this Covid scenario. Some of the techniques explained by Ms. Ranjana are
1. Understanding Emotional Bondage
2. How to experience emotional freedom
In the session she beautifully explained the emotional bondage through physical bondage by giving an example of holding water filled bottle in hand for more than 24 hours it will cause numbness to the hand like way if we keeping an emotional event for example scolding of your immediate boss that particular event in mind for years it becomes emotional bondage. Same time we will think about changing the bottle to a more comfortable container still you will get pain may be more or less than the earlier one. Likewise in the emotional scenario, you may even think about changing of a new boss or changing to some other department. So how to get rid of this emotional bondage is how you are going to detach yourself from the situation? If you connect it to the example of Physical pain you can relieve the pain on hand by keeping the bottle on a surface as simple as that. She explained why detachment necessary by some techniques and also considers oneself as an actor who in actual is a very happy being. Like an actor who is doing different characters for different movies and detaches from them after pack up. Like that, we all are playing a different role in our lives but we have to detach from ourselves to be in actual being oneself end of the day.

Indiatourism Western Region hosts series of initiatives on the occasion of “International Yoga Day”. Kaivalyadhama Lovalavala also participated in the IDY through a virtual tour of the age old Yoga center. The CEO of the center Shri Subodh Tiwari presented the various facilities offered by the institute for the Yoga enthusiasts. Founded by Swami Kuvalyananda in 1924, Kaivalyadhama is one of the oldest pioneering yoga institutes in the world. We follow the principles and philosophy of Patanjali’s Ashtanga Yoga and take pride in teaching traditional yoga in its purest form, with a unique perspective. Kaivalyadhama is the first Yoga institute to proactively conduct scientific research for demonstrating the benefits and uses of Yoga. We apply this knowledge to deliver holistic wellbeing and to impart Yogic wisdom globally.
Yoga is today globally recognised as a systematic meditative, therapeutic, and curative practice. There is an ever-increasing need and awareness for stronger immunity, steady recovery, and a balanced healthy lifestyle. At Kaivalyadhama, we combine Yoga and advanced science to create and innovate synergies across health, education, and research in Yoga.
Kaivalyadhama encourages and facilitates the effective practice of traditional Yoga for physical, emotional, and

spiritual, well-being and healing. We believe that traditional Yoga has the answers for a holistic fulfilling life.
The four day long Yoga yatra concluded on 21st June 2021. With the theme Yoga for children by Yoga instructor Dr. Manasa Rao. Yoga for children is a form of modern yoga designed for children. It includes poses to increase strength, flexibility, and coordination. Classes are intended to be fun and may include age-appropriate games, animal sounds, and creative names for poses. 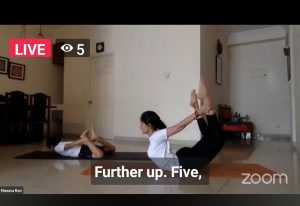 Indiatourism Western Region hosts series of initiatives on the occasion of “International Yoga Day”. Major issues and challenges met by some parents are worried by yoga’s religious associations, believing that yoga is an offshoot of Hinduism. Yoga teachers accordingly sometimes avoid Sanskrit pose names, for instance saying cat/cow instead of Bidalasana, tree for Vrikshasana, and bridge for Setubandhasana. The yoga teacher and education researcher Andrea Hyde however states that yoga is not a religion and can fit into ordinary school curriculums, whatever the prevailing culture.
The benefits for children are similar to those for adults. Emotional benefits include greater optimism and less reactive nature. Mental benefits including increased focus, concentration, and improvements in the quality of sleep have been reported.
The salient features are seen in the academic performance improvement, along with confidence in physical abilities. Yoga is used for the treatment of children with special needs, and to aid conventional medical treatment. Research suggests that yoga practice can protect boys from increases in negative behavior. There are many physical benefits include increased flexibility, improved coordination and balance, and increased core and body strength. Mental benefits include stronger mind-body connection, increased self-esteem, better focus and concentration, and increased ability to relax and cope with stressful situations. Social and emotional benefits include more awareness of self and others, and increased skill in problem solving and conflict resolution.
On 21st June 2021 “International Yoga Day” was celebrated in the virtual mode and there was awesome participation across genre and section of people. The campaign was mooted through print and online platforms for wider coverage in the local newspapers and online media to enhance and visibility
The IDY activates initiated by the Indiatourism Western Region impacted more than four lakh netizens across age groups. The team behind the activates are Indiatourism staff members Ms. Malti Datta, Asst. Director, Ms. Apurva Nayak, and the team contributed to the mass visibility.