You are at:Home»Mumbai»I & B Secretary Visits proposed site of National Centre of Excellence in Animation, VFX and Gaming, Comics in Mumbai Interacts with film & entertainment industry leaders

Mumbai: I & B Secretary Visits proposed site of National Centre of Excellence in Animation, VFX and Gaming, Comics in Mumbai Interacts with film & entertainment industry leaders. The proposed National Centre of Excellence in Animation, VFX, Gaming & Comics project in Mumbai got a further push with the Information & Broadcasting Secretary,  Shri Apurva Chandra, visiting the site and holding wide-ranging consultations with various stakeholders, as part of his two-day tour. 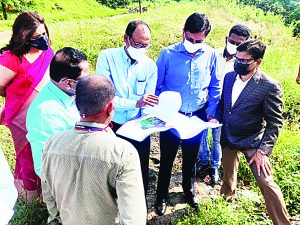 The Secretary also visited the Whistling Woods International Film Institute located in Film City Complex and met with Shri Subhash Ghai and others. Shri Apurva Chandra also visited various private production facilities in Mumbai, including Firescore Interactive, which is a hyper-casual game development studio. He interacted with studio officials and technicians to understand the technological advancements in the VFX industry. Later Shri Chandra held detailed interactions with the leaders of the film and entertainment industry at the Yash Raj Studios to understand the filmmakers’ perspective.

Notably, the Indian animation, visual effects (commonly abbreviated as VFX) and gaming industries have grown and evolved over the last two decades. With more and more filmmakers and TV producers going in for technology-driven products such as VFX and animation in a big way to woo Gen X viewers, there is a growing demand for skilled professionals in the sector.

Indian Companies in the gaming industry have also evolved from being outsourcing companies for western game studios to being pioneers in designing and developing games. Going forward, the AVGC sector is expected to have a greater impact on society – fostering creativity at a grassroots level and being a medium to communicate Indian values to the next generation, apart from generating employment for many.

NCoE AVGC has been envisioned to address this skill requirement by imparting quality education and short programmes in the field.   It aims at creating a world-class talent pool in India to cater to the Indian as well as the global entertainment industry.