The Governor lighted the traditional lamp and took a round of the Canteen Store along with the Commissioner. The Canteen Store will provide grocery, food grains, electronic goods and utility articles to the police personnel, SRPF jawans and Raj Bhavan staff at concessional prices. It will be a cashless store, where only card payment will be accepted. 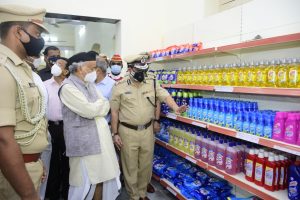