Shri Arun Kumar, Director General RPF while addressing said that suburban railways is lifeline of Mumbai. He said our first act in such emergencies is to ensure passengers do not panic. Hon’ble Minister of Railways Shri Piyush Goyalji while reviewing the monsoon preparations was impressed by the Railway’s Flood Relief Team at Mumbai which uses boats with their force personnel. The teams are trained by NDRF for such exigencies. He also said that Railway Teams are ready for any such incidents and they are the first to reach and provide rescue and relief operations.

Shri Alok Kansal and Shri Arun Kumar have released the SOP for usage of boat and outboard motor by Railway Flood Relief Team. They inspected the Mock Drill conducted by RFRT at Talaopali Lake demonstrating rescue and relief of passengers in a train held up in waterlogged area. They also interacted with the RFRT personnel and encouraged them. 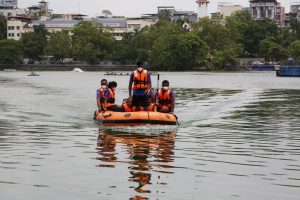 Railway Protection Force have formed a Railway Flood Relief Team (RFRT) on Mumbai Division, equipped with motorized boats and trained manpower. The objective is to provide relief in case of flood in Railways. To predict and wherever possible, prevent disasters, mitigate their impact and effectively cope with the consequences by designing effective, realistic and coordinated planning and increase the overall effectiveness.

GM CR & WR, DG-RPF witnessing Mock Drill.  As such, 5 Motorised Inflatable Boats with all accessories and safety equipment have been procured and stationed at various vulnerable locations. These boats can be moved at any location wherever required for immediate response. Each FRT team consists of one Sub-Inspector/Assistant Sub-Inspector and 6 other staff. So far, 15 RPF staff (5 women and 10 men) have been trained by NDRF. Training is being provided to more RPF personnel.

The team will be always in readiness during monsoon i.e. from June to October every year. The teams will continuously monitor the rainfall especially during the days of high tide or when heavy rain is predicted by the Meteorological Department and move to the place from where flooding is reported irrespective of the fact that the train is held up or not. The team shall maintain liaison with their counterparts in Civil Administration, GRP, Disaster Management Authorities and Control Room. In addition to this, RPF have formulated a well detailed SOP for the Railway Flood Relief Team viz.

Orange Alert – when the water level reaches five inches above rail level, the team moves to the location

Red Alert – when the train is held up at any location relief operation starts after ensuring the water level is three feet at the location.