You are at:Home»Mumbai»Central Railway gears up with monsoon preparations

Central Railway gears up with monsoon preparations. Shri Alok Kansal reviewed the monsoon preparation works on Mumbai Division through a virtual meeting recently. He instructed the officials of the Mumbai Division to check drawings for arrangement over the joint to prevent ingress of water in connection with ‘Augmentation of the waterway of the existing bridge by insertion of new RCC boxes’. Also, several inductions have been given regarding inspection of Cuttings, Tunnels, Catchwater drains, and other monsoon related items. 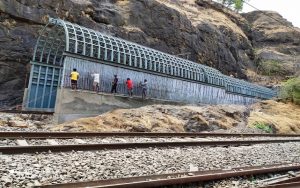 Shri Alok Kansal when he inspected the ghats in 2019 while he was in Railway Board, shared his suggestions for taking various measures at vulnerable locations in the ghats. This includes Canadian fencing at certain locations to retain the cutting in south east ghat, prevention of boulder falling through wire net and steel beams, raising of drain wall to prevent excess water flowing on tracks. The works are in progress. Also, It is planned to provide epoxy grouting of lined portion of the tunnel and steel arch ribs supported on concrete wall up to springing level for unlined portion of the tunnel and work will start soon. Provision of dynamic rock fall barriers with secure drapery of geo composite steel grid/mesh and other protective work is in progress.

South East ghat: length about 28 kms with approximately 58 tunnels, North East ghat: length about 14 kms approximately 18 tunnels. DBKM (Flat wagons) wagons loaded with poclain machine work in ghat to clear muck, clean drainage & are being kept as standby arrangement. So far, 800 loose boulders have been dropped with the help of hill gangs, boulder special train and similar numbers are planned to drop before arrival of monsoon.

Increase in Capacity and number of pumps at identified locations

Railways have also planned to provide heavy-duty pumps for fast drainage as to ensure free flow of the storm water so that the water is drained out quickly from the tracks and train operations are not disrupted during the monsoon period. The number of pumps will be increased by 10% as compared to last year.

Waterproof motors in flood prone area have been provided. Water proofing of terminal blocks, sealing of commutator chamber, gear box and coil drum and modification in gear box assembly are being carried out and completed by May 2021.

Ensuring the maintenance of Crossovers, Turnouts, Masts, Cantilevers etc for smooth operations of trains by operating power blocks. The Live Line Checking by Tower Wagon and Foot Patrolling of sections is being carried out to ensure healthiness of OHE gears for smooth running of trains. The work being carried out are rusty portal booms removal, checking and maintaining critical clearance under ROB/ FOB in entire Mumbai division,

Checking of standby supply DG sets, working of its AMF panel and emergency circuits, trimming of tree branches in the vicinity of electrical assets, outdoor panels, overhead lines, checking of cables and bus bar connections by temperature gun and cleaning with hot blower, overhauling and breakdown attention of pumps at various locations on Mumbai Division.

Quick Reaction Team and Flood Rescue Team of Railway Protection Force have undergone training by NDRF. 5 mechanized rescue boats have been placed strategically for any eventuality. Drone monitoring by the RPF staff for timely inputs to Control Office.

Further coordination meetings are being done with MCGM authorities. Several new initiatives have been put in place by the Central Railway as part of the preparedness for monsoon this year.

1.5 lakh cubic meter of muck removed from the trackside by running muck specials, 225 km length of drains cleaned and 100 km of track raising is planned this year. The works are in progress and will be completed in stipulated time.

The control office is working 24×7 and keep close co-ordination with various agencies of state/central government.

The other divisions – Pune, Solapur, Bhusaval and Nagpur have been instructed to expedite the monsoon related works.