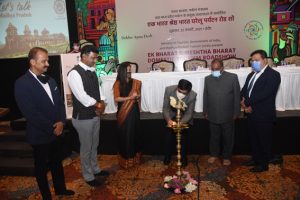 Ministry of Tourism, Government of India organised the ‘Ek Bharat Shreshtha Bharat ‘Domestic Tourism Road show in Indore, Madhya Pradesh on 22nd January, 2021. Shri Yogendra Tripathi, Secretary (Tourism), Government of India was the chief guest and inaugurated the event.
The road show was organised by Ministry of Tourism through its Regional Office in Mumbai in association with Madhya Pradesh Tourism and Manipur Tourism. Ms. Sonia Meena, Additional Managing Director, Madhya Pradesh Tourism Board , Shri Manish Singh, Collector Indore , Shri Krishana Chaitanya, Additional Commissioner of Indore Municipal Corporation participated along with senior tourism officials from State Tourism Board.
Addressing the participants of the Roadshow Union Tourism Secretary Yogendra Tripathi emphasised how Domestic Tourism has become the mainstay of India’s tourism revival and is gaining focus during the recessionary period. He appealed to the tourism industry stakeholders by stating that to stay relevant during the times when world wide web has taken the main stage, it was necessary for them add value to their packages by bringing in an element ‘Experiential Travel’ in their offering to their clients.
The Collector Indore made a presentation on the subject ”Swachh Indore’ highlighting the journey of how Indore went on to become India’s cleanest city and also showcased the tourism potential of the Indore.
Ms. Sonia Meena, Additional Managing Director, Madhya Pradesh Tourism Board recounted the activities organised by the State under Ek Bharat Shreshtha Bharat engagements. 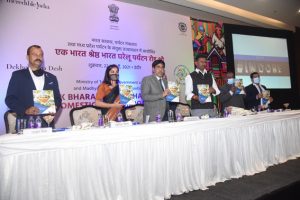 Ministry of Tourism, Government of India organised the ‘Ek Bharat Shreshtha Bharat ‘Domestic Tourism Road show in Indore, Madhya Pradesh on 22nd January, 2021. The event was also supported by FlyBig Airlines, the newest airlines in the Indian Skies which is much needed regional connectivity to tourism destinations by connecting the tier two cities under RCS-UDAN scheme.
The objective of the Roadshow held at the Sheraton Grand Palace, Indore was to provide the impetus to the domestic travel and enhance the marketing efforts of Ministry of Tourism to promote destinations in Madhya Pradesh to the travel-trade and to increase the overall size of tourism business for the stakeholders in Indore city and also educate the tour operators participating in the event from outside Indore about the tourism potential of Indore and places around Indore.
For this event, members from Association of Domestic Tour Operators (ADTOI), Indian Association of Tour Operators ( IATO), Travel Agents Association of India (TAAI) from the States of Manipur (5), Gujarat (10), Maharashtra (4) and 40 members of tourism stakeholders from Indore and various regions of Madhya Pradesh participated in the event.
The Tourism sector has been one of the most impacted sectors due to COVID 19 pandemic with no tourism activities in the country for over 6 months. However, as domestic tourism has started picking up, the road show is aimed to provide an impetus to the sector.
As part of the networking event, a market place had been created wherein the visiting tour operators from Gujarat, Maharashtra and Manipur as ‘Buyers’ interacted with their counterparts from Madhya Pradesh as ‘Sellers’ to showcase the various tourism products of Madhya Pradesh.
Ek Bharat Shreshtha Bharat programme aims to enhance interaction & promote mutual understanding between people of different states/UTs through the concept of state/UT pairing. The states carry out activities to promote a sustained and structured cultural connect in the areas of language learning, culture, traditions & music, tourism & cuisine, sports and sharing of best practices, etc.